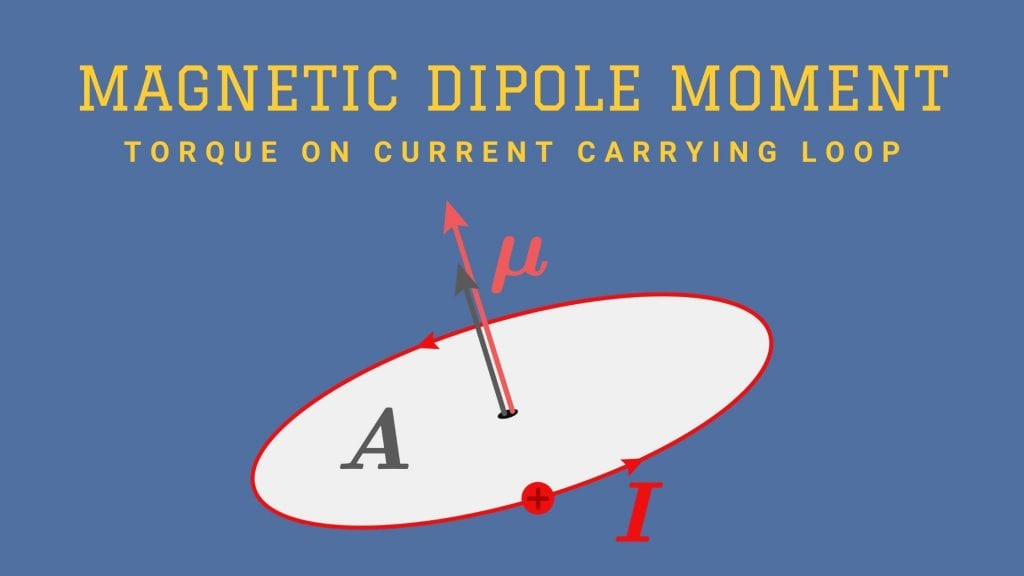 What is magnetic dipole moment in physics?

Firstly, place your hand such that your thumb is perpendicular to plane of loop. Now, turn your fingers in the direction of current. Direction of thumb gives direction of resultant vector.

Formula of magnetic moment is, µ = iA, where i is current in the loop and A is area vector of that loop.

The electron of charge (–e) (e = + 1.6 × 10-19 C) performs uniform circular motion around a stationary heavy nucleus of charge +Ze. We can write equivalent current I for it

I=e/T, where T is time period.

Let r be orbital radius and v be velocity.

Multiplying and dividing by me, mass of electron

but mevr is angular momentum, l

The negative sign indicates that the angular momentum of the electron is opposite in direction to the magnetic moment.

Gyromagnetic ratio the ratio of magnetic dipole moment due to orbiting electron to its orbital angular momentum.

Let’s consider a rectangular loop placed such that the uniform magnetic field B is in the plane of the loop as shown. Current in loop is I.

The magnetic field exerts no force on the two arms AD and BC of the loop because current in it makes 0° or 180° with magnetic field.

Since, magnetic field is perpendicular to the arm AB of the loop, it exerts a force F1 on it. F1 is directed into the plane of the loop.

But we know that, IA=μ

Thus, magnetic dipole moment can also be defined as, a vector quantity which when cross multiplied by magnetic field vector gives torque.

Here, we will see that the magnetic field (at large distances) due to current in a circular current loop is very similar in behavior to the electric field of an electric dipole.

Let us consider a circular loop of radius R carrying current I.

Thus, magnetic field on the axis of loop at distance x is

Note: if you don’t know how this formula came, then visit this blog.