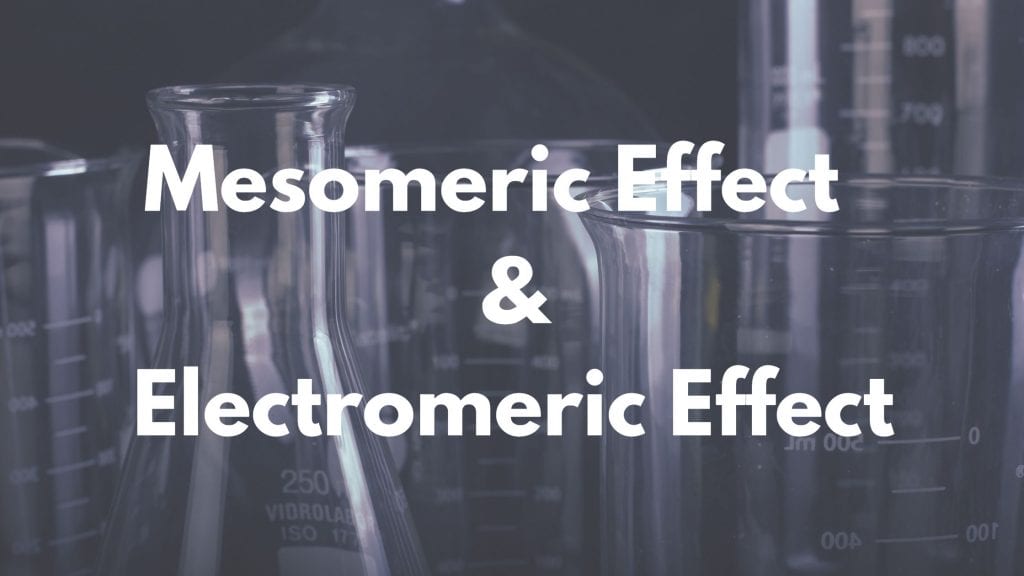 There are some basic principles of organic chemistry that mainly include fission of covalent bonds, types of species based on relative electronegativity strength, and electron displacement effects. Here, we will study all of them but will limit our discussion to the Inductive effect. We will also study other electronic effects in the next article.

The withdrawal or releasing effect of electronic charge due to delocalization of π – electrons can be observed in various resonating or canonical structures. This is termed as resonance effect or mesomeric effect.

There are two types of Resonance or Mesomeric Effect:-

(2) Negative Mesomeric Effect: Some species or groups tend to withdraw electrons away from the carbon chain or the carbon ring. As a result, they exhibit -M or -R effect.
Ex. -NO2, C=O, -COOH, -C≡N

It is a temporary effect that is observed when an unsaturated organic compound is exposed to an attacking reagent. Because of it, polarity is induced in the bond. Consequently, the π-electrons get transferred to one of the bonding atoms. We know it as Electromeric Effect.

The effect remains in action as long as there is an attacking reagent present. Once it is removed, the polarity is lost and the effect vanishes.

The direction of electron transfer can cause two types of Electromeric Effect:-

(1) Positive Electromeric Effect: In this, the attacking reagent happens to be an Electrophile. It polarises the unsaturated bond. Therefore, shifting the electron to the more electropositive atom. As a result, the attacking reagent attaches itself to this atom. We know it as +E effect.
Ex. Addition of acids to alkenes.

(2) Negative Electromeric Effect: In this, the attacking reagent happens to be a Nucleophile. It attacks the more electropositive atom, shifting electrons away from it. We know it as -E effect.
Ex. Addition of nucleophiles to carbonyl compounds.

Why Study with Kunduz?