Principle of moving coil galvanometer is that, "a current-carrying coil when suspended in the uniform magnetic field. It experiences a torque." The coil rotates due to torque. 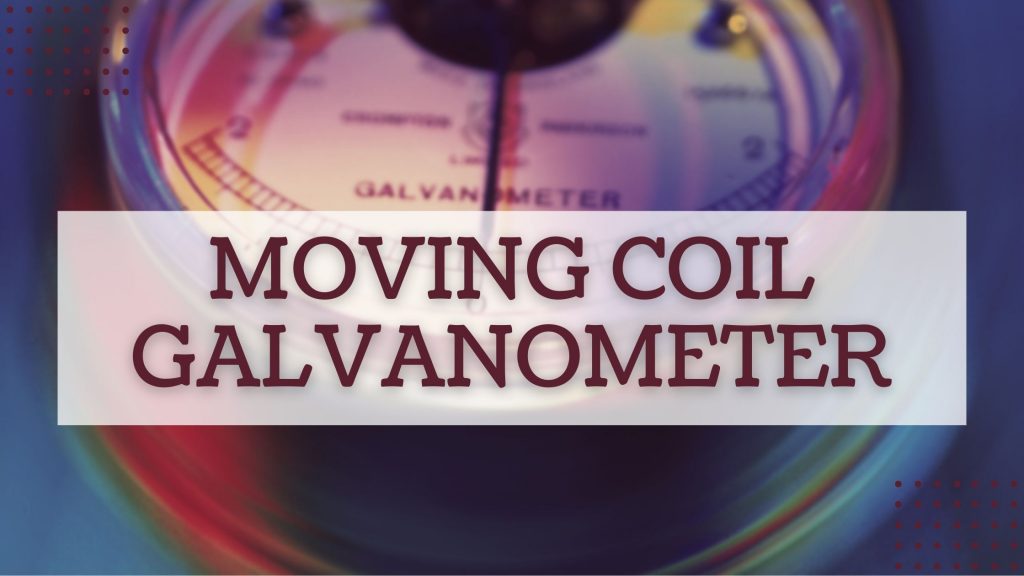 A galvanometer is a type of ammeter which is used to measure small values of current. The galvanometer can be used to determine the presence, direction, and the strength of an electric current in a conductor.

Galvanometer can be various types,

Most widely used Galvanometer is moving coil galvanometer (MCG). It is an electromagnetic device that can measure small values of current.

Moving-coil galvanometers itself can be of two types,

A current-carrying coil when suspended in the uniform magnetic field. It experiences a torque. The coil rotates due to torque.

I : current flowing in coil

A : cross sectional area of coil

The angle of deflection in galvanometer is due to the effect of the magnetic torque, is proportional to the magnitude of current in the coil.

The galvanometer consists of :

The moving coil galvanometer (MCG) consists of a coil with large number of turns of insulated copper wire. The coil is suspended in the uniform magnetic field by a fine phosphor bronze strip from a movable torsion head produced.

There is a cylindrical soft iron core which makes the field radial and also increases the strength of the magnetic field.

A current I flow through the coil having n number of turns and a cross-sectional area A. This coil is placed in a uniform radial magnetic field B. Due to magnetic field B  the coil experiences a torque τ.

Let consider PQRS a single turn of the coil,

Now according to Fleming’s left-hand rule, this force on PQ acts outwards and on RS acts inward to the plane of the coil. This equal and opposite force acts on coil and produces torque.

This torque lead to deflection in the galvanometer that is directly proportional to current (I) that  flow through it.

Use of Galvanometer in an Ammeter

The moving coil galvanometer is a highly sensitive instrument therefore it can be used to detect the presence of current in any given circuit. thus it can be used as ammeter.

Conversion of a Moving Coil Galvanometer Into a Voltmeter

A galvanometer (G) is converted into voltmeter by  introduction of a resistance R of large value in series.

RG : Resistance of the galvanometer

As galvanometer and resistant are in series so,

This is the resistant required to convert galvanometer into voltmeter.