Simple harmonic motion is a periodic motion of a point along a straight line, such that its acceleration is always towards a fixed point in that line and is proportional to its distance from that point. 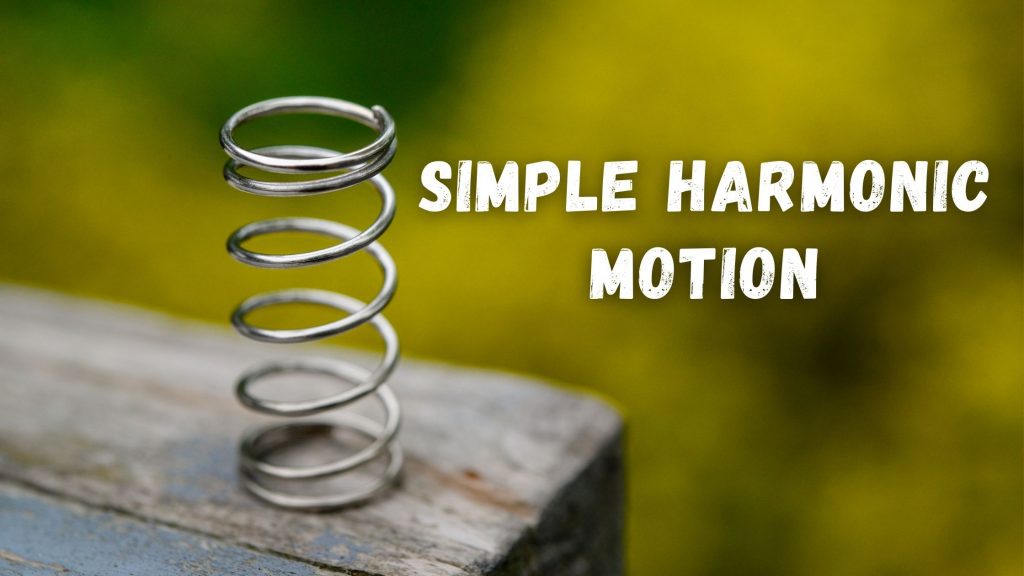 Simple harmonic motion (SHM) defined as the motion that arises when the force on the oscillating body is directly proportional to its displacement from the mean position, which is also the equilibrium position. Further, at any point in its oscillation, this force is directed towards the mean position.

What is simple harmonic motion?

Simple harmonic motion is a periodic motion of a point along a straight line, such that its acceleration is always towards a fixed point in that line and is proportional to its distance from that point

A particle oscillating back and forth about the origin of an x-axis between the limits +A and – A as shown below. This oscillatory motion is said to be simple harmonic if the displacement x of the particle from the origin varies with time as :

where A, ω and f are constants

Amplitude(A) : The amplitude A of SHM is the magnitude of maximum displacement of the particle.

Displacement : The distance of the particle from it’s equilibrium position. Equilibrium is where no net force acts on the particle.

Simple Harmonic Motion can be classified into two types:

In linear SHM  a particle moves to and fro around a fixed equilibrium point along with a straight line.

When a system oscillates angular with respect to a fixed axis then its motion is angular simple harmonic motion.

The direction of velocity v at a time t is along the tangent to the circle at the point where the particle is located at that instant.

Particle P moving in a circle with angular speed ω.

Velocity of the particle in SHM can be given by

It’s projection on x acid at time is

Thus the magnitude of radial acceleration of P is −ω² A

The acceleration of a particle in SHM is proportional to displacement. thus whatever the value of x between –A and A, the acceleration a(t) is always directed towards the center.

Time period is given by

Now by using Newton’s second law of motion, and the expression for acceleration of a particle undergoing SHM, the force acting on a particle of mass m in SHM is

force is always directed towards the mean position hence it is sometimes called the restoring force in SHM.

Both kinetic and potential energies of a particle in SHM vary between zero and their maximum value.

Kinetic energy of a Particle in SHM

Kinetic energy is zero when the displacement is maximum and is maximum when the particle is at the mean position.

Potential energy of a Particle in SHM

Therefore, Potential energy is zero at the mean position and maximum at the extreme displacements.

Total Mechanical Energy of the Particle in SHM :

Thus, total energy is of particle doing SHM is  ½ mA²ω²