What is the role of acid in our stomach?

As we know, our stomach, a bag-like structure is an important part of the digestive system. It plays a major role in the digestion process. This process is aided by the secretion of acids in stomach. Let us see how. Happy learning! 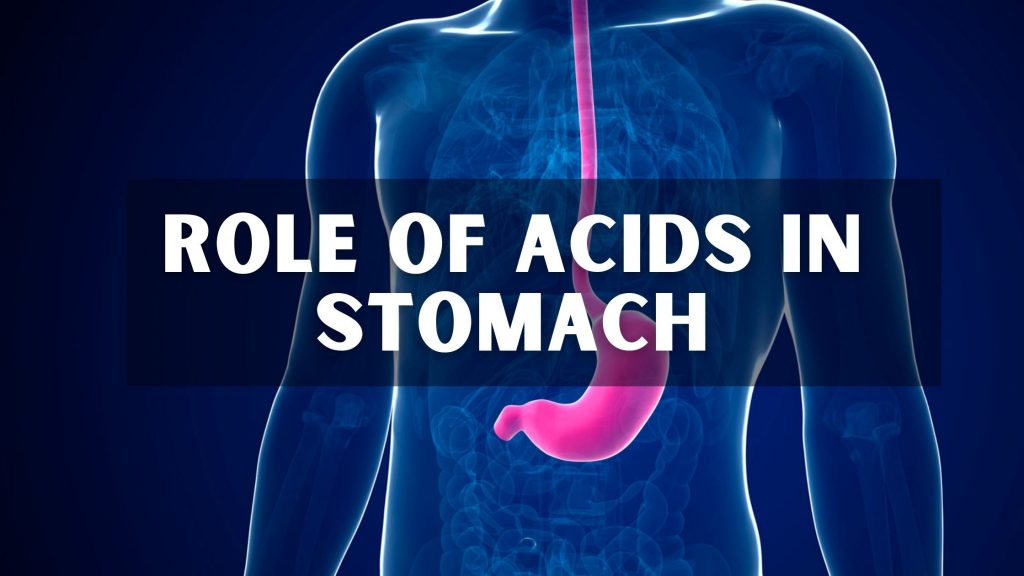 The food we eat is digested by the act of various organs of the digestive system. Along with this many enzymes and acid also helps in digestion. Let us learn the process of digestion. We will also discuss what is the role of acids in our stomach.

Digestion is one of the processes of nutrition. It means breaking down complex molecules into simple ones.

Let us learn about the digestive system of humans.

The digestive system of humans contains many organs that help in digestion. We will discuss them one by one in detail.

In the mouth, teeth are present for crushing the food. The tongue helps in mixing the saliva with the food. Furthermore, saliva also helps in making the food wet for easy passage.

The salivary glands present in the mouth produce saliva which contains the enzyme salivary amylase. The function of Salivary amylase is to break down the starch into simple sugar.

Moreover, Mucus in the saliva helps in lubricating and adhering the masticated food particles into a Bolus. The bolus passes into the pharynx and then passes into the oesophagus by swallowing or deglutition.

The food (bolus) moves by peristaltic movement through the oesophagus and passes into the stomach. It is also known as the food pipe. However, no digestion of food takes place in the oesophagus.

Furthermore, the oesophagus and trachea open into the pharynx. Also, there is a cartilaginous flap called epiglottis which prevents the entry of food into the glottis

It is a bag-like structure that can expand when the food enters it. Sphincter muscles regulate the entry and exit of food in the stomach. Furthermore, it has three parts namely- cardiac portion, fundic region, and pyloric portion.

Moreover, the mucosa of the stomach has a gastric gland. The gastric gland has the following three major types of cells:

Main components of the stomach:

The liver is the largest gland. It produces bile, which helps in emulsifying the fats that break them down into smaller globules that are further digested by the enzymes.

It secret pancreatic juice which helps the following enzymes:

In addition, The pancreatic juice contains inactive enzyme trypsin, chymotrypsinogen, procarboxypeptidase, amylase, lipase, and nuclease. However, trypsinogen is activated by an enzyme enterokinase secreted by the intestinal mucosa into active trypsin which in turn activate other enzymes in the pancreatic juice

It has numerous finger-like projections on its wall called villi. They increase the surface area of the wall for absorption.

The large intestine helps in the reabsorption of water from the undigested food which is discarded through the anus. Hence, there is no role of acids here.