Match each variable to the corresponding scenario. number of 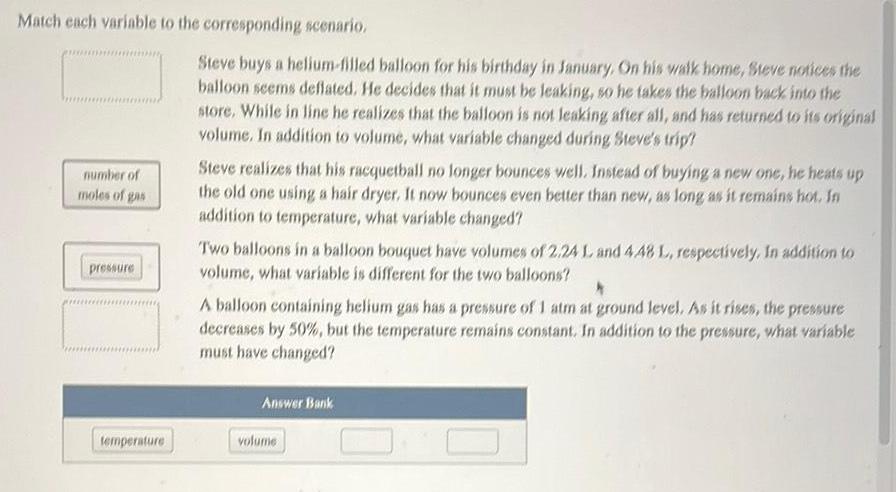 Match each variable to the corresponding scenario. number of moles of gas pressure temperature Steve buys a helium-filled balloon for his birthday in January, On his walk home, Steve notices the balloon seems deflated. He decides that it must be leaking, so he takes the balloon back into the store. While in line he realizes that the balloon is not leaking after all, and has returned to its original volume. In addition to volume, what variable changed during Steve's trip? Steve realizes that his racquetball no longer bounces well. Instead of buying a new one, he heats up the old one using a hair dryer. It now bounces even better than new, as long as it remains hot. In addition to temperature, what variable changed? Two balloons in a balloon bouquet have volumes of 2.24 L and 448 L, respectively. In addition to volume, what variable is different for the two balloons? A balloon containing helium gas has a pressure of 1 atm at ground level. As it rises, the pressure decreases by 50%, but the temperature remains constant. In addition to the pressure, what variable must have changed? Answer Bank volume

©Copyright Kunduz 2023 , All services and content in the Kunduz application are offered to students for educational and training purposes.